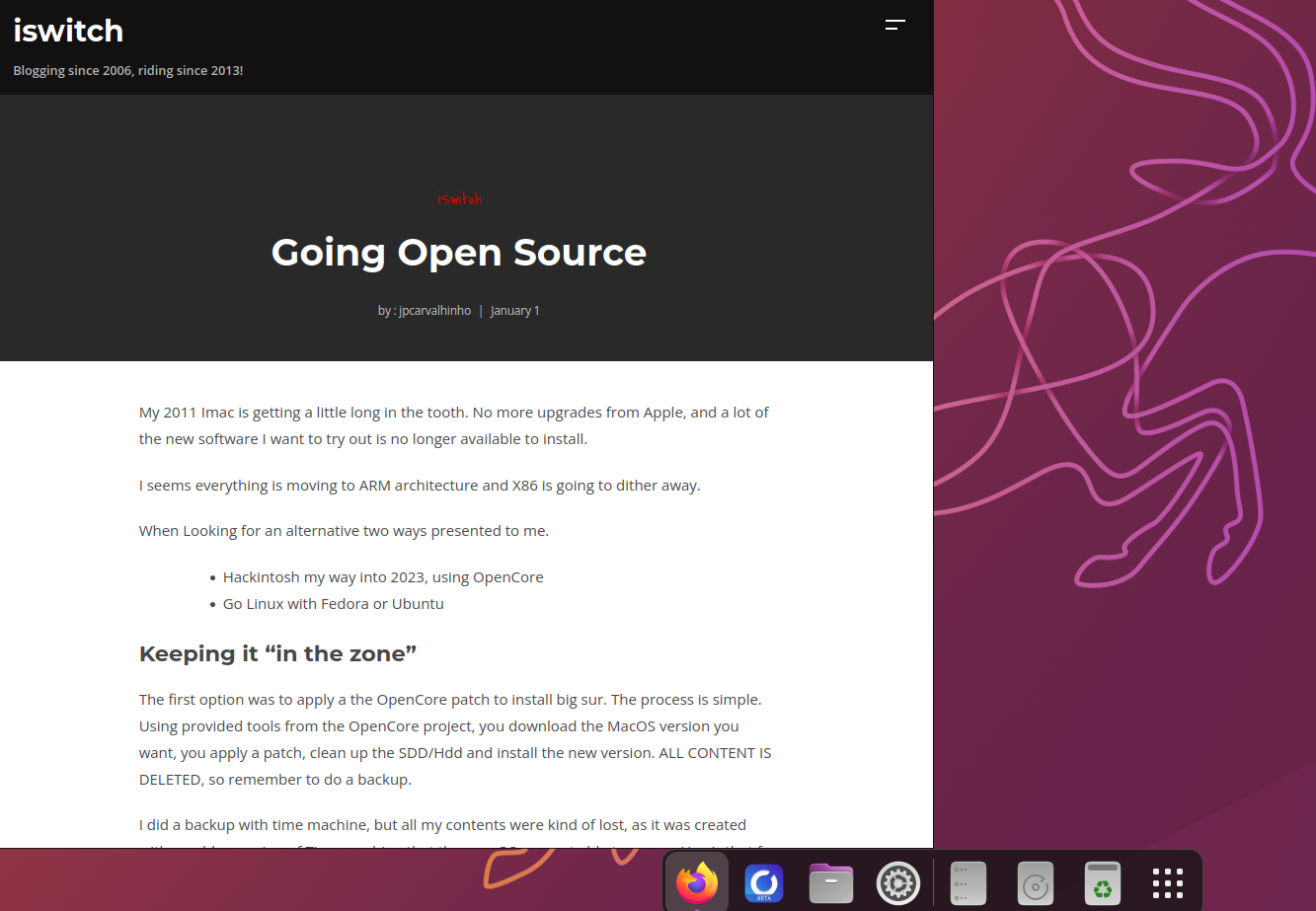 Let’s face it… Even still being a very nice computer… my 2011 Imac is getting a little long in the tooth. No more upgrades from Apple, and a lot of the new software I want to try out is no longer available to install.

I seems everything is moving to ARM architecture and X86 is going to dither away.

When Looking for an alternative two ways presented to me.

Keeping it “in the zone”

The first option was to apply a the OpenCore patch to install big sur. The process is simple. Using provided tools from the OpenCore project, you download the MacOS version you want, you apply a patch, clean up the SDD/Hdd and install the new version. ALL CONTENT IS DELETED, so remember to do a backup.

I did a backup with time machine, but all my contents were kind of lost, as it was created with an older version of Time machine that the new OS was not able to open… How’s that for backups assurance? There is a new way of migrating data in MacOS that is the migration assistant… But I don’t remember seeing it as available in my older instance.
Thankfully, everything was also backed up to an external drive by hand, and all my emails/contacts were stored in a cloud.

Everything worked on this setup, until I tried to run Geforce Now. it would not launch, maybe derived of the fact that the video drivers work via an unsupported patch, so nothing is guaranteed working.

The thing is… I mainly use this computer for gaming via Geforce Now.

After loosing some time to find a nonexistent solution, I decided to move off.

I had lost my gaming capabilities;

I had lost all my software.

Perfect timing to enter the world of Linux

I am not new to Linux. I started playing around with Linux since Ubuntu was still distributed as a DVD.

I have helped the Elementary OS PT translation efforts, and used it for some experiments.

So I guess it was time…

Downloaded Fedora 37, formatted my main Sdd and let it rip. Did a lot of upgrades, intending to use gnome with all default (I tend to break stuff when start fiddling). Installed OpenOffice, installed and configured Obsidian with a new vault and was using Geforce Now from the browser, that proved to be a good enough experience.

But I noticed one thing. Even if Fedora and Flatpack are becoming more and more mainstream, if you check the Ubuntu pushed SNAP store, you will notice that the big software houses developing for Linux do keep the Snaps one step ahead.

Obsidian, even simple things as NPM are much more recent as a officially supported SNAP than flatpak.

Then, during December 2022, I got pulled inside Star Citizen. It was the ship offers, it was the discounted entry levels, I don’t know what pushed me. Instead of Geforce now, I had to move to Shadow PC (A full cloud Windows 10 computer, streamed to your desktop)… opening up all my games library, cutting the dependency with the approved Geforce Now library approvals.

The day after I installed Shadow PC, Fedora issues a new system update.
After this update, ShadowPC would not launch, and every time I restarted the computer, an unspecified error message would appear, with an information that the error wasn’t even being logged.

Ubuntu 22.10 was the answer. It is already working based on Gnome 43, very fluid, with better hardware support (discrete graphics seems to be more mature), better (not so open) libraries and codecs (I believe this was what got updated in Fedora project and broke my gaming access) and when you look for commercial software, the few ones are snaps or have specific instructions for Ubuntu.

After a month and a half, I am still rocking the Ubuntu 22.10. Not looking to switch to anything, not missing any software.

Time to start looking this as my final solution, until I have some money saved to buy a gaming rig… that might take additional 2 years or 3… at my current saving rate :/.